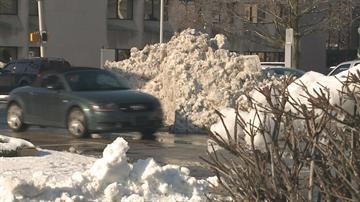 WARSAW, Ind. – Kosciusko County was divided by snow during Tuesday night’s storm.  While western areas, like Plymouth, saw little or no accumulation, areas to the east and south saw reports of up to 12-inches of snow.  The first major snow storm of the year caused havoc for emergency responders.

“It’ll rank up there as unfortunately a more busier one than we’ve had in the past for a first snow of the year,” described Sgt. Chad Hill of the Kosciusko County Sheriff’s Department.

Over Tuesday night and into Wednesday morning the sheriff’s department received a total of 380 calls to their 911 center.

“Around 2 o’clock, when the snow really started to come down quite heavy, that’s when our number of calls just increased dramatically at the 911 center,” Sgt. Hill explained.  “It was just all night long, officers were responding to calls, utility companies getting called out as well as the county highway (department) with trees down and taking down lines at the same time.”

The calls included 177 reported car accidents, 193 calls for downed trees or power lines and 62 calls for fires or fire alarms.  Thankfully there were no serious injuries caused by the storm.

“The statistics are quite a bit higher than what we’ve had in years past for the first snow this early,” Sgt. Hill described.  “It’s just probably because it was just so heavy and wet and it just changed the dynamics of how we normally have to respond to calls.”

Multiple shifts of officers were called in and plows were out all night, departing from normal procedure where drivers usually take a break during overnight storms.  The work didn’t end when snow stopped falling; calls for help continued even as the sun came out on Wednesday and roads were cleared by plows.

“Sometimes people end up going a little bit faster than they should, it gets a little squirrely and they end up sliding off into the ditch,” Sgt. Hill explained.  “We don’t have quite as many as we did last night, but we’re still responding to calls.”

In Warsaw, piles of plowed snow lined the streets of downtown.  In neighborhoods, people took to the street, shoveling the snow covering sidewalks, driveways and cars.

“As far as I can remember it’s never been this heavy, for the first snowfall,” described 16-year Warsaw resident Michael Suhany.  “We lost power several times last night and then it’s been flickering in and out today.”

Suhany and many others around Warsaw were not expecting the level of lake effect snow they saw Tuesday night this early in the year.