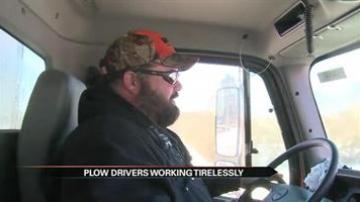 MARSHALL COUNTY, Ind.-- The cold, snowy weather means some people get to stay home, but for others - it means more work. Road crews and snow plow drivers have been in high demand lately.

"What's really fun is when you get up to a huge drift and you look at it like I don't know and you get through it and you're like oh yeah," said Jack Preston, a snow plow driver.

Preston has been plowing roads in Marshall County for about eight years now-and says he logged more overtime in the past three weeks than any other year.

He says he has worked more than 60 hours overtime just last week.

"I worked 104 hours last week and I had two days where we only worked eight hours," said Preston.

The winter weather has been relentless. Preston has had little time at home. He says he sleeps at the highway department during his four hour breaks.

"A lot of our wives get a little upset because people like me, it was five nights I stayed at the shop because I'm only going to be off work for four hours. I can stay there and get three and a half hours sleep compared to driving home and getting two hours of sleep," said Preston.

Preston says he's only stayed at the county building a handful of times in the past-but this year is different thanks to Mother Nature.

"Tonight will make 14 or 15 nights I've had to stay at the county this year," said Preston.

Without Preston - and other plow drives like him - many roads in Marshall County would be impassable.

He says he's getting used to the demands of the job.

"The first couple days it just seems like man the day is so long, but after you do it a couple of days it's like it's not so bad," said Preston.

Preston said he has accumulated more than 170 hours of overtime since January 1 with only two full days off because of the brutal weather.