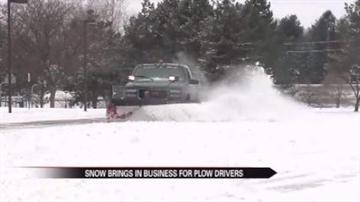 ST. JOSEPH COUNTY, Ind. -- While everyone else tried to stay out of the snow Wednesday night, those in the snow removal business geared up for a long night. Some business owners are hoping snow removal can help their bottom line.

When the snow starts falling, David Duncan starts calling, informing his workers that it's time to bring out the plows.

His company's six plow trucks hit the roads and worked at 60 businesses and then another 50 residences.

But they had to wait until midnight-when the majority of the snow had already coated the ground.

"It is really a terrible industry for the most part, because Mother Nature dictates what you do and when you do it,” said Duncan.

Duncan says Mother Nature was good to him this time.

"We've got everybody clean, even the residential. But all the businesses were clean when they opened up this morning and that is the perfect night,” said Duncan.

Many local landscaping businesses took a hit from the drought and economy. They normally can rely on the winter to make up for it, but not lately.

"Last year we only plowed 5 times the whole season. This year isn't looking any better when your first snow fall is after Christmas,” said Duncan.

Even a fencing business now plows snow for some extra cash. But it's down 75 percent.

Even though Bel-Aire USA is now in the snow removal business, the vice president said that last year they did only 25 percent of what they earned the year before.

Unfortunately he said it looks like another dismal winter for the industry.