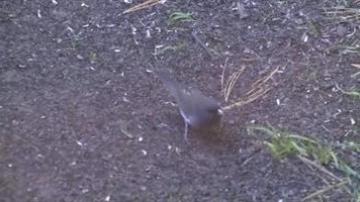 CHESTERTON, Ind.--Praying for an early snow?  You may be in luck--thanks to a little sparrow called the Junco!

"It comes in at the end of migration," said Brad Bumgardner, Park interpretive naturalist at the Indiana Dunes State Park. "It's all black with a white belly-- and for a lot of folks they call him the snow bird because it signals the end of fall is near and winters on its heels."

Bumgardner  says the coloring of the bird even matches its nickname.

"One of the signature signs of the junco is the white on the tailfeathers," he said. "It kinda looks like snow is on his tail is coming down from the farther north."

The bird arrived earlier than usual this year and people walking through the park took notice. Amy Bobb liked the idea that a bird could predict the weather.

"Wow that's amazing that that little bird was created and could fly down here and predict snow," said Bobb. "That would be awesome."

But others like John Kirby found it all a little to hard to believe.

"I'm gonna say false because I don't know if there's gonna be snow in October..really?"