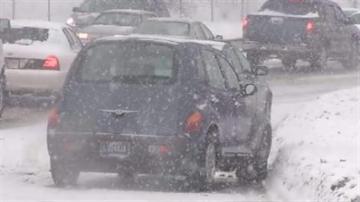 ST. JOSEPH COUNTY, Ind. -- Tuesday's blast of snowfall brought rush-hour traffic to a standstill along parts of Cleveland Road. It all started with an accident at Cleveland Road and Riverside Drive just before 4 Tuesday.

Police responded to dozens of accidents, many of which happened on a three mile stretch of Cleveland Road between Ironwood Road and Riverside Drive. Although many of the accidents were only minor, It kept emergency responders busy and commuters at a standstill.

Michiana got another round of snow, but mother nature did not have good timing. The heaviest snowfall came just in time for drivers' evening commute creating some dangerous road conditions.

"You couldn't really see the car in front of you. I wasn't out too much today, but when I was it was pretty bad, you could see well," said Ricky Jensen who lives along Cleveland Road.

The icy roads had police tied up for hours, especially along Cleveland Road. Near Riverside Drive, three cars rear-ended one an other sending three people to the hospital.

"It doesn't surprise me because people don't realize how slippery the slush is," said Robin Steininger Tuesday.

What did surprise many, however, was the backed up traffic on Cleveland Road just east of Riverside Drive. Several drivers were not prepared to stop hitting the cars in front of them, including a school bus that was rear-end while sitting in traffic.

There were no kids on the bus at the time and neither the bus driver nor the other driver were injured.