Snowmobile accident in Cass County sends two to the hospital 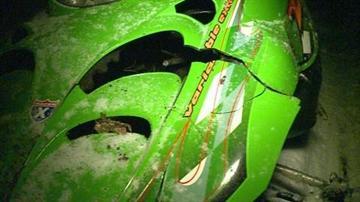 CASS COUNTY, Mich. – An accident involving two men on snowmobiles is being investigated by the Michigan State Police.

The men, who according to police are in their early 30’s, were riding on a snowmobile trail in Howard Township, Monday night.

According to State Police, white-out conditions were present at the time of the accident.

First responders found the men lying on the ground near the snowmobiles.

Both were taken to the hospital after complaining of injuries.

One of the men said his back was in severe pain, the other believed his leg had been broken.

Investigators tell ABC 57 the men’s story of how the accident happened and where they found the men and machines doesn’t mesh.

According to police, the men told them they were riding up the trail when the lead snowmobile was forced to break suddenly.

The driver claims he locked-up the breaks and turned his machine sideways.

Police were told the second snowmobile couldn’t stop in time and ran into the side of the first machine.

But investigators at the scene say, the machines appeared to have been moved after the crash.

Police could not say if alcohol played a role in the crash, but said the men would be tested at the hospital.
Share this article: