Some braved the cold temps to stock up on food 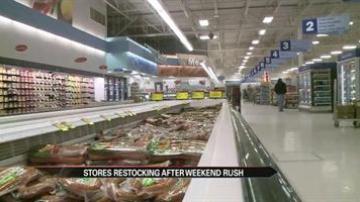 MISHAWAKA, Ind. -- Because of the weather, few stores in Michiana were open on Monday. Meijer was open and many people braved the weather to get food.

"We made the mistake of running out of food. It's one of those great things that happens when it's like forty below," said Mike Passini.

passini went to Meijer because not much else was open.

He says he regrets his decision to bring his pregnant wife out in the cold.

"It's absolutely horrible. It feels like a hundred below. We had like a foot of snow on the car, we had to dig ourselves out," said Passini.

Workers at Meijer were busy stocking the shelves after the big rush for supplies over the weekend.

"They had everything I ever wanted and then some," said Passini.

Store Director Rick Zeff says business doubled Saturday. They saw twice as many customers than normal as people prepared for the storm.

He says restocking the shelves is important for those people who do make it there.

"We're receiving product and putting it back together and staying open so we can take care of the people that need things like drugs in our pharmacy, a gallon of milk, a snow shovel or something like that," said Zeff.

Zeff said several workers couldn't get to work because of the poor road conditions.