Some homes haven't had trash pickup for three weeks 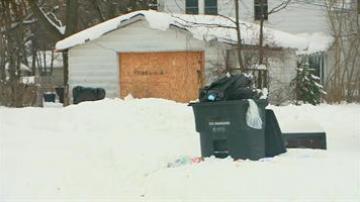 SOUTH BEND, Ind. -- In South Bend, the unrelenting snow is causing a delay in trash collection. If you drive around, you will see trash cans lining the streets and overflowing in the alleys.

The city of South Bend says they were out with front loaders Tuesday trying to clear the now-frozen mounds of snow.

One homeowner says trash hasn't been picked up for three weeks.

Garcia's trash is seeing a lot of action - from birds who now call it dinner.

She's called the city multiple times-but they still haven't shown up to take it.

"Some people always say I haven't had this problem in years, but most people need to know we normally clear about 15 alleys a year in a whole snowfall. This year we're triple that already," said Andre Price, Manager of Operations for the City of South Bend Solid Waste Collection.

That means they're used to clearing only 15 alleys, but this year they've already done close to 50.

A front loader is the only way to get at the problem.

"So we have to remove the snow from the alley. It's a not a matter of just pushing the snow because then we'll push it up against peoples driveways and stuff like that," said Price.

Garcia and her neighbors stopped waiting for the front-loader to arrive.

They cleared a path themselves, but now the only thing on the way is more snow

"We have more snow. We just opened all this up, here comes more snow. How long do we wait you know? That's my issue," said Garcia.

Price says he doesn't recommend people try to clear the alleys themselves because most of the time people end up only getting halfway and then leaving a huge mound that makes it even harder to clear.

If you really need help, he says you should call 3-1-1