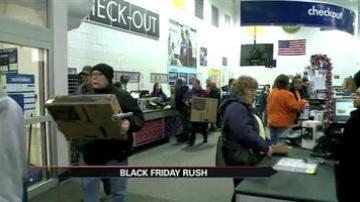 MISHAWAKA, Ind. -- It is proving to be one busy Thanksgiving for shoppers across Michiana. This year several stores chose to start the Black Friday deals a day early.

Hundreds of customers flooded into Best Buy and other stores Thursday night to grab those holiday deals.

Customers like Bryson Banks, who has been waiting in line since Wednesday to buy a Kindle for his sister.

He even performed Anna Kendrick’s “Cups” in line to stay warm.

“We had hot chocolate. We sang songs. We did the wave with some of the people in here,” Banks said.

While it’s a fun tradition for some, judging from the determined look on some shoppers faces and how quickly they were moving, it was clear this was strictly business for many.

Workers at Best Buy said some items are literally flying off shelves.

“Definitely phones, the deals we have on smart phones today. Our tablet deals. Our tablet deals, our iPad deals, some DLCR cameras are flying out, and TV’s are always a hot item when it comes to the holidays,” said Best Buy Employee Jeff Crowder.

What about Toys R’ Us down the street?

People there waiting in line were treated to free hot chocolate.

But by the end of the line the freebies ran out---and folks were surprised at the big crowd.

“We were actually trying to get some Furbys. But I didn’t expect a line like this at all,” said Sean Crossley.

It’s the same story we tell year after year—long lines and cold temperatures.

But sisters Cheryl Ward and Renee Yoder said, anything for the grandchildren.

“Me and my daughter have been doing this for like six years,” said Renee Yoder.

University Park Mall, Best Buy, and Toys R’ Us are open until 10 Friday night. And Target is open until 11 pm Friday.