Some residents allowed to return home after plane crash 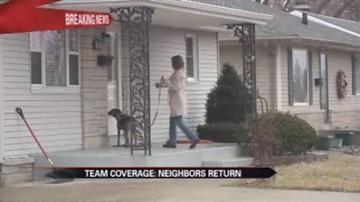 SOUTH BEND, Ind. -- Residents near the 1600 block of North Iowa Street in South Bend are still in shock after a plane crashed into three homes Sunday afternoon, killing two people and injuring three.

It has been more than 24 hours since the residents living on or near the 1600 block of North Iowa Street were told they had to leave their homes immediately after the plane crash.

"I was lying in bed and like I said, it sounded like Air Force One going over the house and then all of a sudden I heard this boom and I'm thinking, ‘What in the world is that?’ And then I went outside and I couldn't see smoke,” said Sam Williams, a resident of North Iowa Street.

It wasn't until the fire trucks and ambulances arrived that residents realized the extent of what was happening.

"Nobody expected to have to live someplace else last night. That was the last thing on your mind when you came out of your house. But when we came out, they wouldn't let us back in,” said Williams.

Evacuees only had time to grab the essentials and they were told it would be days before they could return.

"Once I knew that, the first thing I wanted to do was, I want to get my dog out. So the officer let me go in and get her, but it was very surreal,” said Iowa Street resident Kimberly Scope.

Fortunately, most people were allowed to return to their homes Monday afternoon, if not to stay, then at least to grab more essentials.

"The text message that I got from my neighbor that said, you can go home now, was the most amazing text ever,” said Scope.

Some of the residents were allowed to return to their homes Monday.