Some state fair victims possibly not getting relief money 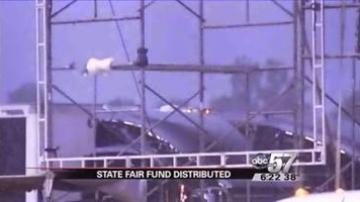 INDIANAPOLIS, Ind. -- Money from the Indiana State Fair Relief Fund will soon be handed out, but some victims won't get anything.

"I do not for a minute minimize their injuries. There was a limited amount of money, said Kenneth Feinberg of the Administering Claims Process. “You have to make judgments on how to distribute the money. It's not easy.  I think we did the best we could."

The state received 56 claims, but only 28 will be paid out. Some got denied due to lack of documentation.Other claims were denied based on time spent in the hospital.

Strong winds toppled the temporary stage in August right before a Sugarland concert. Seven people died and 45 more injured including a Mishawaka woman.