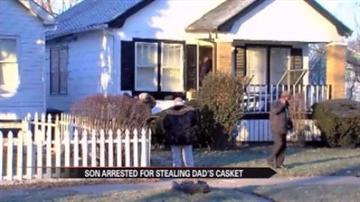 DETROIT -- Police arrested a Detroit man Tuesday for allegedly stealing his father's corpse from the cemetery where he was supposed to be buried.

Clarence Bright's 48-year-old son was arrested, along with another man, after officers found an empty casket in a white van at a gas station.

It didn't take officers long to find the 93-year-old's body in his son's basement in a freezer.

The body was reported missing on Monday after the casket disappeared from a cemetery on Detroit's east side.