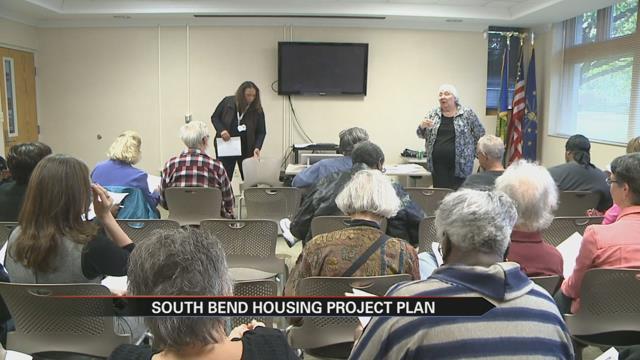 A few South Bend activists are asking for help to build new roofs on the city’s west side.

The plan was brought up at Monday night’s Community Forum for Economic Justice.

The initiative would raise enough money through community donations to revitalize three roofs on the west side by spring.

“A roof that’s not repaired gets worse. When the roof is leaking, it affects other things in the home,” Linda Wolfson, president of the Community Forum for Economic Justice said.

That’s why Wolfson and Vice President of the Forum, Regina Williams-Preston, came up with the idea.

“We have people that want to begin a revolving loan fund,” Wolfson said.

That’s what Wolfson and Williams-Preston announced they plan to do.

Their roofing initiative would open a revolving loan where community members and organizations could donate money.

If $15,000 is reached by spring, the organization will choose three neighborhoods off or around Lincolnway West and fix a roof for one home in each neighborhood.

“We’re talking about the homes that could become empty under the wrong conditions,” Wolfson said.

Right now, the plan is so new, it doesn’t even have a title yet, and the city is looking to learn more before supporting the plan financially or otherwise.
“I think there’s a lot of promise there. It’s certainly something that has precedent around the community and around the country,” Director of Community Investment Scott Ford said.

Expert Anne Mannix says it will take some work.

Mannix is a housing consultant who has been in the neighborhood development business for years.

“We’d have to make some policies. Who would get the loans, what would be the requirements? Would there be any income requirements?” Mannix said.

Then there’s the issue of getting people to donate in the first place.

“I think ongoing funding would be really a big thing,” Mannix said.

Wolfson says these are concerns they’ll be looking at incoming months, but she’s confident it can be done.

“It’s doable. We needed a plan that was doable,” Wolfson said.