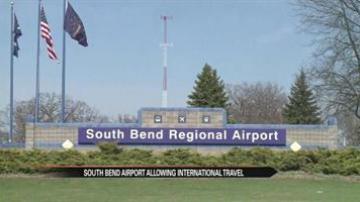 The Chamber of Commerce says over the years it has seen a huge growth in international travel.

And instead of sending South Bend residents to other cities to fly internationally, they would like to keep that money in South Bend.

“To be able to fly directly in and out of here is a real advantage and a lot of people like that and so the continued expansion is in response to local people wanting to use local resources,” said St. Joseph County Chamber of Commerce President Jeff Rea.

He said this expansion will attract business, more visitors, and even prompt more people make South Bend their permanent home.

“So what it does for us is it raises our profile. It puts us on radar screens we wouldn’t be on otherwise," said Rea.

Officially, the airport is not sure what new areas it will serve, but they are negotiating with airlines.

Two airlines have expressed interest in nonstop flights from South Bend to Mexico and the Bahamas.

Flights to Canada and Europe are also in the works.

They estimate the new international flights will add about $100 million annually to the South Bend economy.

Construction will begin this summer at an estimated cost of $3 million.

Man who recorded the Ahmaud Arbery shooting has been receiving threats