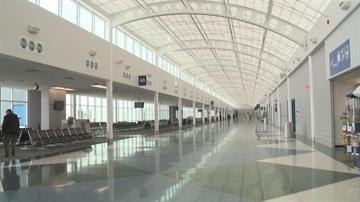 “Essentially we’re completed, this is 27-months and about $15 or $16-million worth of effort out here,” explained John Schalliol, Executive Director of the airport.  “Today we’re done.

For the past few months passengers have had to walk to the airport’s new terminal through a temporary passage that took them outdoors across part of the tarmac.  As of 4:30 a.m. on Wednesday the passengers could pass from the newly opened security checkpoint directly into the new terminal.  The new checkpoint includes body scanners, technology that’s gained a controversial reputation nationwide.

“The equipment we use here in South Bend and we began using this morning in opening the new checkpoint is millimeter-wave imaging technology,” explained Jim Fotenos, a spokesperson for the Transportation Security Administration (TSA).  “This technology uses harmless electromagnetic radio-waves to look for items both metallic and non-metallic.”

Fotenos explained that the scanners used in South Bend are not the same models that have caused nationwide controversy after objections that other scanners displayed revealing pictures of people who were scanned.

“This technology uses a generic outline for each passenger and every passenger appears the same at the checkpoint,” Fotenos explained.  “If there’s an item found a small box is displayed on the location of the item right here at the checkpoint, the passenger can look over their shoulder and see exactly what our officers see.”

Passengers can opt-out of going through the scanner, but would then have to go through a physical search by a TSA agent.  Fotenos also explained that the other objection many had to body scanners, that they use radiation, doesn’t apply to the models in South Bend.

“It’s thousands of times less than what is usually used by your cell phone, it is safe for all passengers,” Fotenos explained.

Because the new scanners detect metallic and non-metallic objects, the biggest change passengers flying out of South Bend will see is that they will be required to completely empty their pockets.  Any objects, metal or otherwise, will be spotted by the scanner.  Some of the passengers flying out on Wednesday didn’t have any qualms about the scanners.

“It was very simple, east, fast,” explained Janet Marner, who was flying to Seattle from South Bend.  “It’s just real simple, you just step in there and let them do their thing and that was it.”

Though much attention was paid to the new scanners, officials said their focus was on the completion of the work to renovate the airport.

“The biggest treat to me is to hear somebody get off the plane and say, ‘I think I’m in the wrong city, this isn’t South Bend,’ and that makes me feel good,” explained John Schalliol.

The new terminal still requires a few finishing touches including a water fountain.