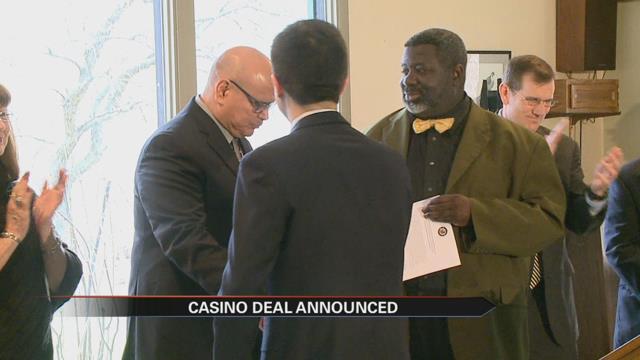 The city of South Bend and the Pokagon Band have reached an agreement in regards to a proposed casino.

Wednesday, city and tribal leaders announced that after more than a year of negotiations, they have settled on a deal that would take effect if the casino is built.

“This is a good deal for South Bend,” Mayor Pete Buttigieg said.

Half of those payments would go to the city’s general fund, the other half to the Redevelopment Commission.

The city will provide sewer and water for the proposed casino and tribal village.

Construction on the facilities cannot begin until the Bureau of Indian Affairs approves it, but the Pokagon Band says they’ll get started quickly as soon as that happens.

“When the land goes to the trust we’ll build, we’ll open, and then 12 months after opening, the payments will start coming to the city of South Bend,” Chairman John P. Warran of the Pokagon Band said.

The deal was not required, but plenty of negotiation.

Warran says it was the toughest local negotiation he’s ever faced, but both sides are satisfied.

“I think it’s the most responsible thing to do for a tribe,” Warran said.

Some in the community are not happy about the agreement.

“Whatever the Pokagon might give to the city, this casinos’ going to take away much more in terms of infrastructure costs, social costs,” Jake Teshka, of Citizens for a Better Michiana said.

If approved, the casino and tribal village will be built on Prairie Avenue near the intersection with US 20.