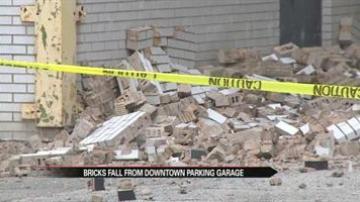 SOUTH BEND, Ind. -- A South Bend block was closed after bricks fell from a parking garage on Wayne Street around 12:30 a.m.

Wayne Street is closed between Main and Michigan streets.

St Joseph County Building Commissioner Chuck Bulot says the fact that bricks fell off the center of the parking structure is alarming.

Bulot says the streets are blocked off because they're concerned more bricks will fall.

The timing of the collapse proved to be everything.

Had it been a few hours later, when people were commuting to work, this story would have had a very different ending.

One family owned business is being affected. The bricks smashed into their gas line and there's no way for them to fire up their grill.

Bulot says there are no inspections required on the outside of buildings. The county inspects the interior, but not the exterior.