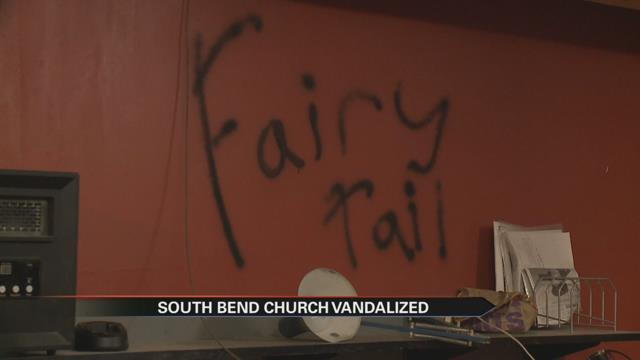 Five thousand dollars worth of tools and technology were stolen from a south bend church that’s still under construction, but that’s not all. Someone also sprayed graffiti inside the church.

Police think the person or people who did this could be someone the Pastor of  Vida Nueva Church of God, Jorge Carpinteyro, knows.

The Pastor says there’s a chance the thieves entered through a small window on the roof of the building. He added only people who’ve walked around this building know it’s here.

“In all honesty, the door did not have a secure lock on it. It’s just a matter of pulling the handle and it’s open,” said Carpinteyro through an interpreter. “Every other door is secure; it’s difficult to get through those.”

But that’s not the only thing that led Pastor Carpinteyro to think the burglars know him.

Before they left with the tools and a computer--- they signed a note and left it on his desk.

“They took my notepad and wrote me a little note. It said 'fairy tail' with my initial, the letter j and it said, 'Sorry Amigo,'" he said.

The pastor left the building around one Saturday afternoon. He says the damage had to be done shortly after he left or early Sunday morning because that’s when he found out.

“The person working that day called me and said, 'Pastor, they opened our building and got in and vandalized,'" said Carpinteyro.

Graffiti was also found all over the main room.

“Many have said it has to do with anime and nothing to do with gangs,” said the pastor.

For the past 8 years Vida Nueva has shared a building on Ireland Road and now as they're moving forward, they were targeted.

"Well, it feels awful... A sensation of vulnerability,” said the pastor.

He says he doesn’t understand the reason for the crime, other than it was just a plain evil act.

“This is a church very involved in the community. We want to engage and make a difference, not just with the Hispanics, with everyone here in South Bend,” said Carpinteyro.

Police have been asking for serial numbers and other things that might lead them to the robbers.

Pastor Carpinteyro says this doesn’t hinder their process of completing the church—on the other hand; it makes them want to work harder.