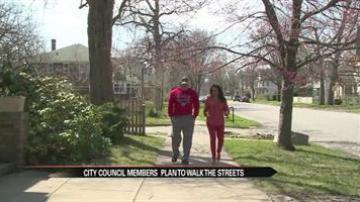 SOUTH BEND, Ind. -- Thirty shootings in about four months. Many are calling those numbers unbelievable and unacceptable. Now, some South Bend City Council members are going to hit the streets in search of solutions.

"I started as a cadet in 1975, and I can honestly say I've never seen or heard of 30 shootings in 90 days," said Derek Dieter, South Bend City Council Vice President.

In a couple weeks, he and at least two other council members, Tim Scott and Karen White, are going to try to bridge the gap between members of the community, and city council.

Dieter says they are starting in some of the roughest neighborhoods.

"There will be a starting place and we are just going to walk through the neighborhood and end up where we end up, no set plan," said Dieter.

Dieter said he hopes to expose council members to some things they may otherwise only hear about over the phone.

"I think that it is important for us to come out in the streets and experience what neighborhoods are like, someone can come in and tell you but until you are here and you have your foot on the ground, you really do not know what it's about," said Dieter.

The first walk through will be in May.

Dieter said city council members will continue the walks every couple weeks for the rest of 2014.