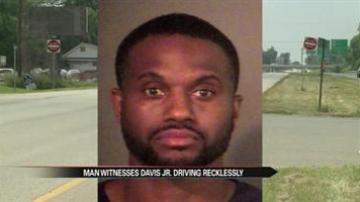 SOUTH BEND, Ind. -- South Bend Common Council member Henry Davis Jr was arrested early Saturday morning after driving the wrong way on the US20 bypass. He was charged with operating while intoxicated.

Driver Chris Marysz says he was almost run off the road by Davis' car.

“He could've killed me, my passengers, and many other people, too,” said Marysz..

The probable cause affidavit details the traffic stop and arrest.

St. Joseph County Police Officer Anthony Bradburn pulled Davis over after spotting him driving the wrong way on the US 20 bypass.

He had to ask Davis several times to get out of the car and to perform standard sobriety tests.

The council member registered a .14 when he blew into a portable breathalyzer test, according to the affidavit.

Davis was then taken to the Mishawaka Police Department for a certified breath test, but Davis refused to take the test.

Davis was then taken to the St. Joseph County Jail and booked for operating while intoxicated.

“I think Henry Davis Jr is being irresponsible towards the people of South Bend. I also think he should seek medical treatment for his personal problems that are self-destructive," says Ferlic.