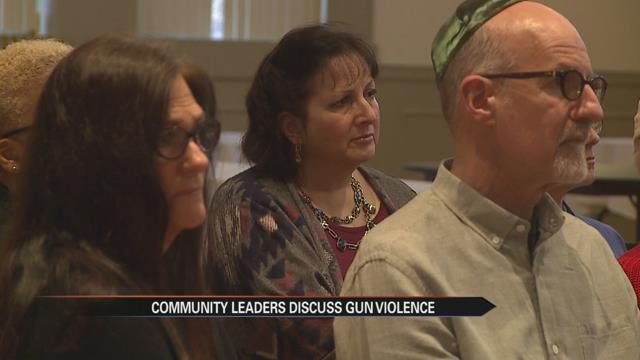 The Gun Violence Prevention Sabbath was held at the Sinai Synagogue with the message “Pray, Learn, Act.”

The challenge of preventing gun violence is an issue many people discuss from a safe distance.

“So many of us don’t have a clue what it’s like,” said Bobbie Woods.

But for Woods, gun violence isn’t just a topic for debate. It’s the source of incredible pain.

“My son was shot down inside of Burger King in downtown South Bend. It changed my life tremendously. Life will never be the same,” said Woods.

As co-founder of the Mamas Against Violence, her son’s death was the catalyst for her to take a stand against gun violence.

“We have lost so many lives senselessly in this community to violence and if we don’t get the community involved it will continue to take away our children’s lives,” said Woods.

Now Woods along with other local advocates and civic leaders are calling for a change.

Backing them up is South Bend Mayor Pete Buttigieg.

“There is no more fundamental obligation that government has than to insure the safety and protection of its citizens.  Yes, the gun lobby is powerful but eventually you have to make it be an issue if people oppose, if elected officials oppose common sense measures how do we trust them with any other decisions that they make,” said Mueller

But even with government support— advocates say it’s time for the community to act.

“We have a mayor who supports it, we have a majority of citizens who support it, the folks who own guns support it so let’s get to work,” said Common Council elect Jo Broden.

For more information about upcoming events

To find out more information about supporting the organizations involved in gun violence protection, visit the links below.