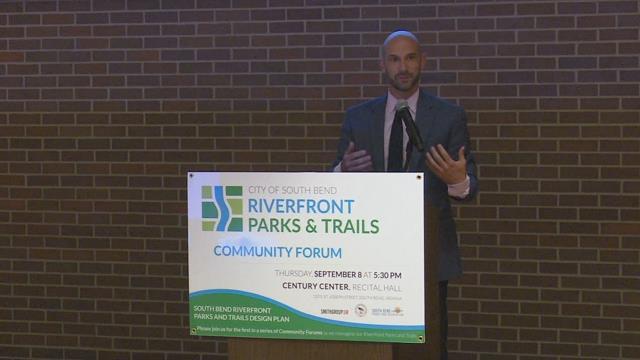 The South Bend Parks Department has a lot to think about after hosting the first of four community forums Thursday evening.

The department is trying to gather residents’ input on how they want to update the river parks and trails throughout South Bend.

“In recent decades, we’ve tended to turn our back on the river, so this is a chance to look at the river as an asset, as a jewel for the community,” said Executive Director for the Parks Department, Aaron Perri.

“It is of course the bend in the river that gives our city its very name,” said South Bend Mayor Pete Buttigieg.

“That’s kind of the blood that flows through our city,” said Perri.

“I think that the river is the major natural asset of the city, and it’s just been neglected, and it just has so many opportunities to bring people together in the downtown area,” said Judith Robert, a South Bend resident.

And the city is hoping to do just that with this community forum.

“This will be the first phase of the most significant reimagining of the riverfront in over a hundred years,” said Perri.

Perri said community input is an important part of the process.

The community seems to be on board with his plans.

“I think it’s something that helps improve the growth and also the desire for people to come and live in the community, or even come to visit it,” said South Bend resident Beth Sanford.

Residents seem to have the same idea of where they want the city to focus.

“Well I would like to see Howard Park become a destination for everyone in the community,” said Robert.

“I like they want to rebuild the ice rink, and up the size of the senior citizen, and make the ice usable in the summer time, not for ice, but for shows,” said Robert Heiderman, who runs East Raceway for the city.

Lucky for them, Howard Park is one of the top priorities—along with Seitz Park.

The city’s goal is to solidify an engineering plan by next spring and break ground by this time next year. The development team plans to host another forum in November and the last two in 2017.