South Bend Cubs announce upgrades for 2016 and beyond 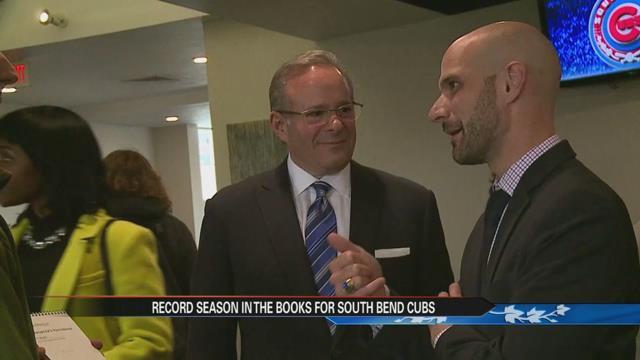 A record season is in the books for the South Bend Cubs. On Wednesday team and city leaders gathered to honor the team's many accomplishments in its first year and announce exciting new plans for 2016.

South Bend Cubs owner and chairman Andrew Berlin announced the team will be adding a patio to the performance center. In the coming weeks they will be blowing a big hole in that building to add about 200 more seats. That will cost about a quarter of a million dollars.

"Not necessarily a rooftop," said South Bend Cubs president Joe Hart. "But it's going to be something pretty similar and I think it's going to be a great experience and a great place to watch the game from."

The team will also be improving the visiting team's locker room. And renovating their kitchens. The goal there is getting better quality food out faster than last season.

There is still a chance the team could add a second level to Four Winds Field in the future. But they say getting fans in seats this season is the first priority.

"This enterprise has to be a profitable enterprise to continue to give the kind of enjoyment, the kind of experience that our fans have come to expect," said Cubs owner and chairman Andrew Berlin. "But we have to make sure fans show up and buy more tickets."

It's not just the inside of the stadium getting a boost. The surrounding area could see improvements as well.

"On top of the building will be rooftop restaurants and concessions and party areas," said Berlin.

Planning is still at first base, but city leaders are loving what it could mean for downtown South Bend.

"It just makes it that much more fun to live in South Bend," said Mayor Pete Buttigieg.  "It brings a lot of people from the outside to come and contribute to our economy too."