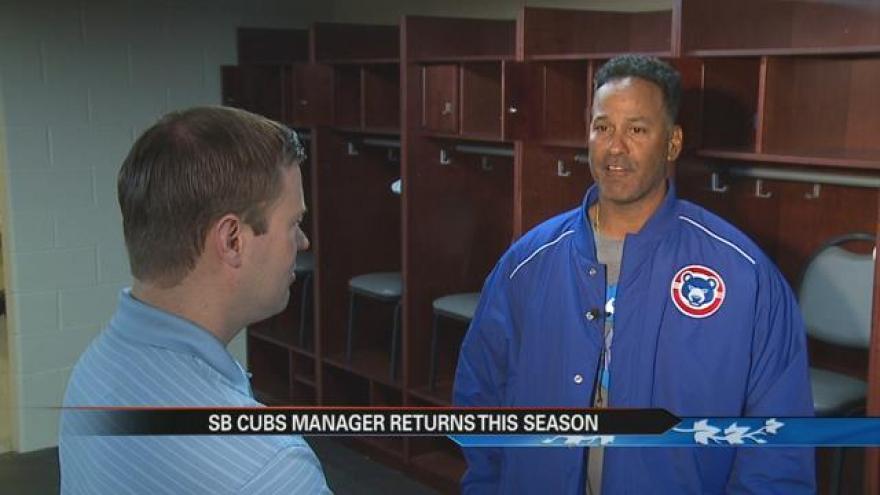 South Bend Cubs Manager Jimmy Gonzalez is returning to Four Winds Field for his second season. We spoke with Gonzalez about what he expects from the team this season.

For Gonzalez, it's not just about coaching on the field.

Taking a bunch of young guys and molding them into major league men is no easy task.

In his second year with the organization, Gonzalez has got his message down to two words.

"Play hard. That's number one. If we do our things as individuals, things happen as a whole. These guys, everybody is willing to work hard. A lot of young guys who play the game hard. That's one of the main things that I expect, and they know that," said Gonzalez.

Last year, the Single-A South Bend Cubs, in their first year at Four Winds Field, finished with 65 wins and 72 losses. They placed third in the eastern division of the Midwest League.

Gonzalez hopes this year's team can do better.

He thinks the positive energy surrounding the Chicago Cubs will help his ball club rise to the occasion.

"It creates an excitement when you see the big league club doing what they're doing, and it filters all the way down. Young players want to be a part of that, and they see the hype and the media of the big-league club, and that's a motivation for them to want to get there, and the staff as well. We see what they're doing and we want to be a part of that as a whole," said Gonzalez.

He also gives a nod to Andrew Berlin for the world class performance facility they built last year.

This way, rain or shine, the team can still get their reps in.

"If we didn't have that, we wouldn't be able to hit at all, or just do minimal things. It's such a big facility where we could pull the nets back and take ground balls. That's the plus where it doesn't interrupt the work and we're able to get everything in," said Gonzalez.

While winning championships is a serious business, Gonzalez also wants his players to appreciate why they play the game in the first place.

"I think having fun is number one. In the end, it's a game. Obviously it's their job, their profession, but it's having fun. At the same time, respecting themselves and respecting the game," said Gonzalez.

There's no day on the calendar more fun than the first one.

"The excitement of opening day and being in front of a huge crowd especially knowing what to expect now, it's exciting. The fans may not realize how important they are, but they're huge in our eyes," said Gonzalez.