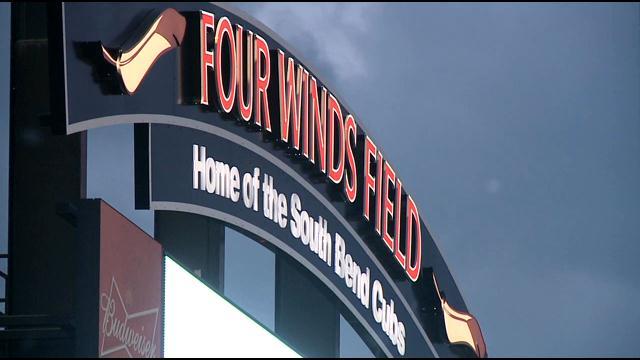 It was a big day for the South Bend Cubs season opener at Four Winds Field.

They went up against the Bowling Green Hot Rods.

Weather may have gotten in the way of things leading up to the game, but the fans did not care.

It is the beginning of new era in South Bend, with the Cubs affiliation, and Thursday night was a much anticipated night; one that many enjoyed together, as a family.

Crawford and his other sons traveled all the way from Atlanta to support Rashad.

“These kids, they're still babies, trying to make it to the big dance, and I feel like every little bit counts if they know you're in the stands and behind them, it kind of pushes them a bit more,” said Crawford.

They are Rashad's number one fans.

Inside the gates is the same, but different story.

These fanatics are just happy about the new affiliation.

“Well I've been a Cubs fan all my life so when the Cubs came to South Bend, it was so exciting and I had to come to opening day,” said Bob Lewandowski.

The Lewandowskis spent a special day in the grass of Four Winds Field.

Max Lewandowski got a little surprise for his ninth birthday.

“Oh my gosh, it's going to come right at us. I mean I didn't have to move and it fell out of my hands and I dove for the ball and it's my son's birthday so here you go,” said Bob Lewandowski.

It was a home run that had “Happy Birthday Max” written all over it.

“This is the first home run here as South Bend Cubs and we got it, so it's really great,” said Lewandowski.

While fans had their eye on the skies all day, the weather did hold off leaving fans looking forward to a new age of baseball in South Bend.

“I mean, it's so electric being here. It's just so much fun, the atmosphere,” said Bob Lewandowski.