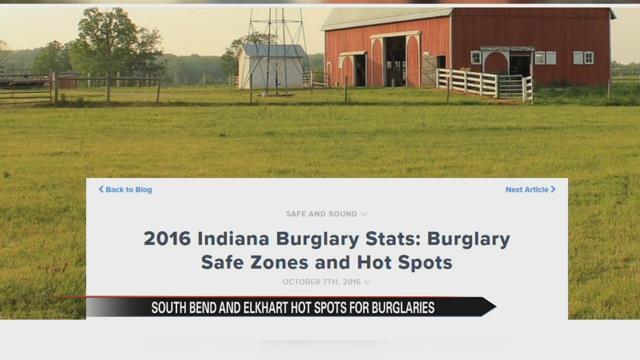 South Bend and Elkhart have more in common than just the state they’re in, Protect America, a national home security company, has released its 2016 Indiana burglary statistics and both of these cities made it on their list of “Top Ten Burglary Hot Spots.”

Out of ten, South Bend is ranked the top city in Indiana with the highest burglary rates and Elkhart trails behind at number six.

For the past three years, Protect America has been taking these stats from the FBI to help communities better understand their burglary rates.

South Bend Sergeant Kelly Waite, who used to be a burglary investigator, says the department sees a spike in these crimes around this time of year.

“Burglaries are up slightly and that’s typical for this time of year in general, anytime we get close to the holiday season,” said Sgt. Waite.

According to Protect America and the FBI’s uniform crime report from September 28, South Bend has more than 1,400 burglaries.

Sgt. Waite says burglaries aren’t hard to investigate and the biggest help they can receive is from the victim.

“Very rarely do officers themselves catch a burglar without someone calling because we don’t know who belongs where it’s always the neighbor that sees someone suspicious,” said Sgt. Waite.

That is exactly what Carol Garcia has done in the past years.

“If we see something suspicious outside we’ll call them or they’ll call us, but we’re always in touch,” said Garcia.

Garcia is a burglary victim. “It’s all around us so that’s kind of scary,” she said.

Since then, she has installed burglary bars on all windows facing the street stopping future crime.

“It had been pushed in but they didn’t get in so we came home and reinforced,” Garcia said.

“Communities that have neighborhood watches see 17% less property crime. It’s really a way for citizens to get involved with their own property crime,” said Schwarslose.

“Hoping to start great conversation about what communities can do to reduce property crime, because we would love to live in a world where we don’t write these lists,” said Schwarslose.

Another tip given by Sgt. Waite is to write down all serial numbers to any property you have. There is a free service by SBPD that allows you to record and list your property.

Sgt. Waite said officers don’t have access to that information; it’s just a way to have everything accounted for.