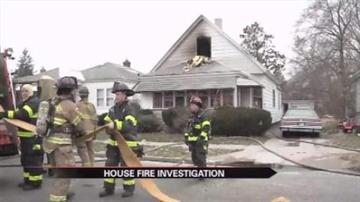 SOUTH BEND, Ind. -- A South Bend family is without a home after a fire, sparked by a lighter, took out the second level of the Johnson Street home Wednesday morning.

Investigators say the fire started in a child's bedroom.

When firefighters arrived on the scene just after 11 a.m., fire was coming out of a second story window.

The fire was under control within ten minutes.

Shamil Howard said, "There were flames everywhere." Shamil said he heard the smoke alarm go off while he was on the first leave of their two-story home watching television. He ran run stairs to check on his little brothers who were in the room they all share.

"I just heard the smoke alarm and then it was like, beep, beep and then I woke up my mom," said Shamil.

Satia Howard admitted she didn't hear the fire alarm going off until her oldest son woke her up and told her his room was on fire.

"My Mom told me to fill up a bucket with water, so we started pouring water all over the fire but it was still going, so I said call 911," said Shamil. He said one of his little brothers ran next door and asked a neighbor to call 911.

When fire crews arrived they had some scary moments of their own-- the nearest fire hydrant was either frozen or broken.

Mark Catanzarite South Bend Fire Department's Battalion Chief said, "There is another hydrant just south of here about midway down the block... it was not frozen and we were able to get water out of that hydrant to supply water to the trucks. There were reports there were heavy smoke and heavy fire involvement on the second floor of this structure, crews went in with an attack line and quickly brought the fire under control."

Meanwhile police kept Shamil and one of his brothers warm in a police squad car while Satia and her other son spoke to fire investigators in another emergency vehicle.

Catanzarite said, "Temporarily these folks are going to have to find shelter someplace else."

Satia believes most of her children's toys and clothing were ruined in the fire and she said they do not have renter's insurance. She said they would be staying at her mother's house and if anyone would like to donate clothing or toys they can do so by dropping items off there.

The Red Cross met with the Howards to offer the family some short term assistance this afternoon.

If you are interested helping out this family email ABC 57's Judi Lykowski ([email protected]) for more information.