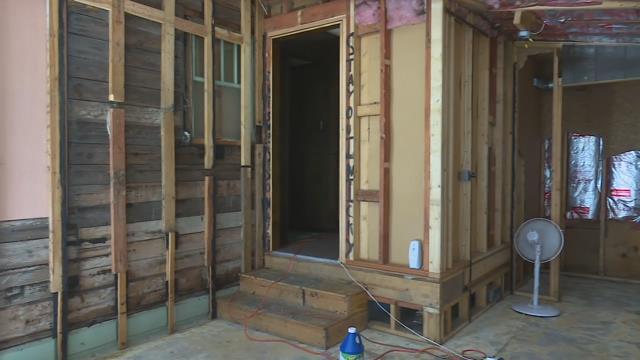 The flood waters have receded in South Bend, but the work is not over for many Michiana homeowners waiting for federal funding to afford repairs.

Coleman and her family moved into a house on the corner of Scott Street and Jackson Road in June, just two months before record-breaking floodwaters swallowed her neighborhood.

“We were planning on just updating everything and living here and enjoying it,” Coleman said. “And, now, we have to redo it, and live here, and deal with what happened.”

And all of their electrical wiring has to be replaced.

“My kids are sleeping on their grandparents couch right now,” Coleman said.

Many of the homes along Jackson Road and Scott Street are sitting empty right now, because families were forced out as the flood waters rose.

Residents want to return, but they’re waiting for that all-important federal funding to do so.

“We didn’t have insurance that covered flood damage,” Coleman said. “So we have to depend on that [funding] to help us at least get started with the electric, so we can move back in with the electric.”

Residents in the neighborhood lost cars, homes and memories.

The floodwaters may now be gone, but the need for a helping hand isn’t.

“We still need help,” Coleman said. “Even our friends that live down the street that have two floors damaged that were main living quarters, they need help as well.”

Coleman added, “[My neighbors] want to rebuild. They weren’t going to at first, but they want to now, and we do too. We want to stay here. We don’t want to leave or just leave it behind. It’s our home and we’re going to stay.”

County officials said low interest loans for flood victims that Governor Pence applied for could be coming as soon as the next few days.

Until then, you can also call the St. Joseph County EMA to report flood damage, and you can apply for more funding through the Indiana Disaster Relief Agency.