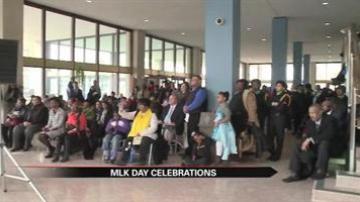 South Bend Mayor Pete Buttigieg says this year is the first year the city has recognized the day as a holiday for city employees.

He said it was a change he felt compelled to make in honor of Dr. King.

The lobby of the city county building was packed with people celebrating just how far we've come in the years since Dr. King's assassination.

Guests enjoyed music from a local church choir, in addition to the reading of Martin Luther King's famous 'I have a dream' speech.

Next attendees marched on to the Century Center where the MLK event ended.

"Our community was touched when there was that violent incident in Elkhart. We've confronted violence in our neighborhoods for years. And I think remembering that message of non violence is very central to what today is about," said Buttigieg.

Mayor Buttigieg says although many employees were off work and students were out of school, the day shouldn't be a day off.

He says instead, it should be a day of action to further Dr. King's dream.

We asked some of the attendees what this day means to them.

"Paying homage to the past. People who died for my liberties, I have my son and stepson here. We did the march and they were like wow this is a long way. I said this isn't anything compared to what people did for us, how far they marched for us," said Camesha Hervey.

"Martin Luther King represents hope. He represents all of the trials and tribulations we have gone through as a people," said Johnnie Johnson.