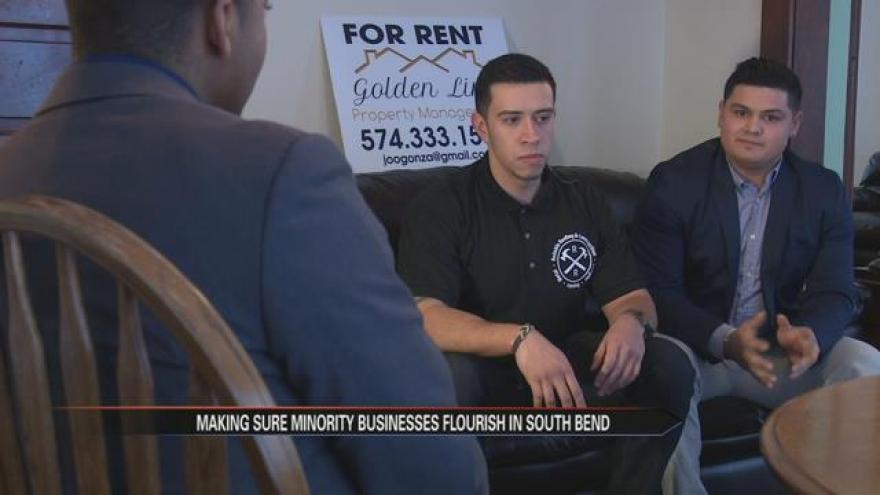 South Bend is looking to build equity in its Latino community.

The city’s mayor Pete Buttigieg announced Monday a new partnership with the Latin American Chamber of Commerce that could bring more minority small businesses to the city.

Gordillo’s business is one of two new ventures that are opening up on Mishawaka Ave.

“We’re such a small company at this point and we’re trying to grow as big as we possibly can,” said Gordillo.

He’s a young entrepreneur from South Bend, that will be taking advantage of a plethora of resources, the Latin American Chamber of Commerce is offering.

Gordillo and Johnathan Gonzalez, the owner of the Golden Line Property Management, just moved into their new office building Monday.

And while they are a month away from their opening, they’re a week away from training classes the Commerce center will offer.

“What the students will get out of this is learning how to build a business plan, strategically understand their competition,” said Juan Hernandez, President of the Latin American Chamber of Commerce.

The eight-week seminar series is in part, thanks to the mayor’s office.

Mayor Buttigieg promised last year he would ensure inclusion is felt throughout the city when he hired diversity officer Christina Brooks.

These training sessions will teach small business owners how to grow their businesses and compete for city contracts.

“It’s a great thing for us when everyone can have a voice at the table,” said Hernandez.

With a little help from a supportive community, two more voices will soon be added to the table.

“All the services offered by the chamber and the city i believe that’s really helped us and really will help us be able to grow more and expand and really run our businesses how we should be running it,” said Gonzalez.