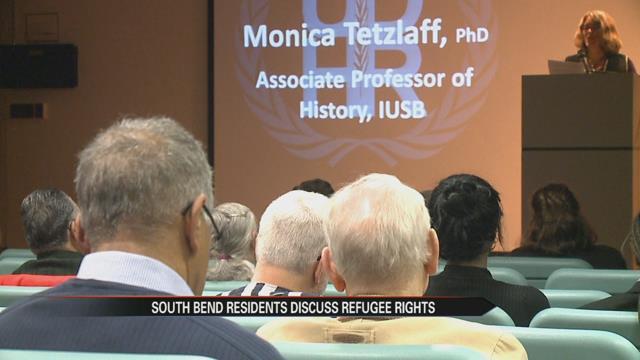 “We don’t need to have a blanket knee-jerk and even shall I say a disgustingly discriminatory approach,” said Tony Flora, President of North Central Indiana AFL-CIO Council.

“I think we’re violating the principles of our country and our constitution and what this country is supposed to stand for,” said Darryl Heller, Director of IUSB Civil Rights Heritage Center.

“We need to think them through and we need to think with our hearts and our heads and not just with the gut reaction or the knee-jerk reaction,” said Heller.

He said one knee-jerk reaction came from the governor’s office.

“Indiana was right to suspend our participation in the resettlement of Syrian refugees and that will continue to be our policy,” Governor Mike Pence said in November.

Pence said that reaction was warranted after the terrorist attacks in Paris, but officials in attendance on Thursday said action out of fear should never jeopardize human rights.

“Fear can only be confronted by openness and by embracing all of our humanity,” said Flora. “We have to recognize that people are fleeing a war and they’re trying to protect themselves and their families.”

That sentiment was echoed from the South Bend mayor’s office as representatives presented a proclamation recognizing December 10 as the official Human Rights Day.

But many at the event want every day to mirror the principles the day carries.

“What we’re saying today is, human rights only exist because every community stands up, every home, every factory, every school,” said Flora.