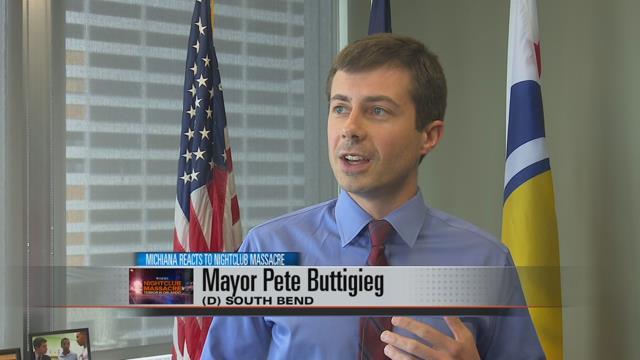 From the LGBTQ community, to the Hispanic community to the Muslim community, leaders are asking for love and acceptance.

“I think the way folks came together last night, we saw it in a couple different places, shows that this is a community that walks together and walks forward in courage,” Buttigieg said in reference to the LGBTQ Center’s vigil for the victims Sunday night.

The weekend’s terror hit hard for the LGBTQ and Hispanic communities especially.

It was Latin night at Pulse, the gay bar that was attacked.

Many of the victims were Hispanic.

Centellas says the loss can’t be contained to one group or community.

That includes the Muslim community.

“As a proud American Muslim, I stand in solidarity with the LGBT community,” Imam Mohammad Sirajuddin, of the Islamic Society of Michiana said.

He says although the suspected shooter may have been motivated by radical beliefs, Michiana Muslims denounce the terrorism.

“This is not Islam, and in no way does Islam justify these horrific attacks on innocent human beings,” Sirajuddin said.

From the mosque, to La Casa de Amistad, to the County City Building, all three leaders agree, discrimination against any group must be stopped.

“Any time any group gets singled out, all of us are worse off,” Buttigieg said.