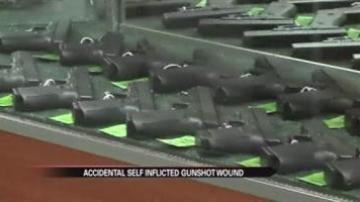 SOUTH BEND, Ind.-- A South Bend man is recovering after he accidentally shot himself in the stomach.

“I saw the fire truck out there and I did not really know what was going on,” said neighbor Daniel Almageur.

Those fire trucks on the 600 block of East Broadway Street were for a man who accidentally shot himself.

Police say he dropped his firearm and a bullet went right into his stomach.

He was rushed to Memorial Hospital with non-life-threatening injuries.

“I did notice that he was sitting up in his gurney when they were loading him up so he seemed like he was doing fairly well,” said Daniel Almageur.

Almageur says he was shocked by the firearm incident.

“I was surprised because he seems like an older gentlemen that he would know to make sure his weapons are unloaded,” said Almageur.

Still Almageur says this accident is an important lesson.

“I always keep them locked up and make sure they are unloaded before you attempt to clean them,” said Almageur.

Midwest Gun Exchange Manager Brad Rupert says the majority of accidents can be avoided by following these simple tips.

“The first thing is you always want to keep it pointed in a safe direction,” said  Rupert.

You also want to always keep your finger off the trigger.

Rupert says you should always follow these safety rules when handling any weapon.

You can sign up for a gun safety class with a certified instructor through the Midwest Gun Exchange for $60.  Classes are on Saturdays from 10 a.m. to 4 p.m.