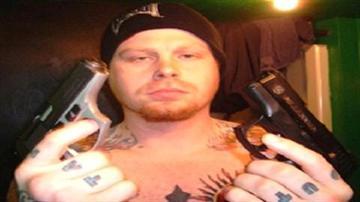 SOUTH BEND, Ind. – Threats made on Facebook are being used in a federal case against a South Bend man. Justin Kemble was arrested after writing a post on the Facebook page of Midwest Gun Exchange. The post has since been removed, but preserved as evidence provided as part of court documents by the Bureau of Alcohol, Tobacco and Firearms (ATF).

It all started when Kemble brought the gun to Midwest Gun Exchange in Mishawaka. According to court documents, Kemble presented the gun to an employee seeking information about its legality, since the serial number was defaced.

A post on Kemble’s Facebook page sheds light onto how he came to possess the gun. He writes in a post on his wall that he purchased the gun from his former step father. According to court documents, his step father purchased the gun via Craig’s List and admitted to ATF Special Agent Laurie Jolley the serial numbers were defaced when he bought it.

According to Jolley, Kemble told her in the parking lot of Midwest Gun Exchange he knowingly kept the pistol despite the damage to the serial number. In court documents Jolley points out, knowingly possessing a firearm with a defaced serial number is a violation of federal law.

The ATF then confiscated the weapon, a Bersa .380 caliber pistol, Thunder 380 model. The pistol is manufactured outside the United States.

Kemble was free to go, but his anger over losing the weapon he paid $200 for was evident in several Facebook posts he made later that day. In one post, laced with expletives, he writes, “that 1 [expletive removed] got my pistol confiscated, I got plenty of other guns but I want to murk that [expletive removed].”

Agent Jolley then used a popular internet website called Urbandictionary.com to identify what the term “murk” meant. The website provides several definitions to the slang term, all of which indicate it means to seriously beat, harm, or kill a person or thing.

Many of the entries for the word “murk” are laced with profane language. Words can be submitted to the website through a simple user interface in which data fields are filled out. A disclaimer at the bottom of the submission page reads, “Entries may be edited and become the property of Urban Dictionary.”

The evidence provided by Special Agent Jolley was sufficient enough for a federal district court judge to issue a warrant for Kemble’s arrest on two federal charges. The first charge is for knowingly threatening to cause bodily harm to another person with the intent to retaliate against a person for providing information to a law enforcement officer relating to the possible commission of a federal offense.

The second charge is for knowingly transmitting in interstate commerce a communication containing a threat to injure the person of another. Jolley argues the ability to see the threat on the Facebook page outside of Indiana’s borders satisfies transmitting the threat over state lines.

Just days after the request for an arrest warrant was filed, a Russian network television program based out of their District of Columbia bureau, poked fun at the ATF’s use of Urbandictionary.com as a reliable source for defining words.

According to Collins English Dictionary complete and unabridged tenth edition, “murk” is defined as a verb meaning: to murder (a person).