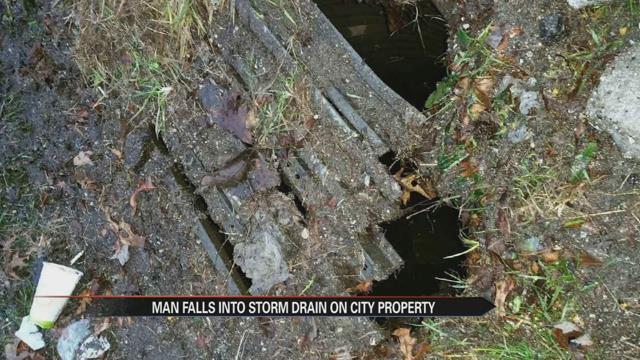 A South Bend man says he was injured when he fell into an uncovered storm drain on the side of a busy road.

Now he wants to make sure it doesn’t happen to anyone else.

Saturday night Michael Rose was walking from 7 Eleven to his home on Mayflower Road when he fell and his leg got stuck in this uncovered storm drain on the side of the road.

“You know it’s a five foot drop, if I would have went in there no body would have found me you know. My first thought was I need to get out of here, it’s cold and I’m stuck," said Rose.

Rose made it out with minor injuries but says it could have been much worse. He walks the same route with his son daily.

“My son is 4-years-old, if he goes down there he breaks a leg, breaks his neck or anything nobody’s going to hear him over the cars driving past. You know, he’s gone. My son could have been dead that day,” said Rose.

It’s a fear Rose says he doesn’t want other pedestrians to go through. But because there aren’t sidewalks on Mayflower Road, Rose says pedestrians have no other options but to walk on the grass.

"I would rather have this happen to me in a less severe way than having the cops find somebody down there dead,” said Rose.

Although Rose contacted St. Joseph County Police, he says he was told government officials are the ones to handle these situations.

“Now that they’re aware of it, they need to do something about it. And if they don’t, obviously it says a lot about our city,” said Rose.

A simple solution he says could save lives.

“Put a sidewalk here for pedestrians so we can be safe. It’s that simple,” said Rose.