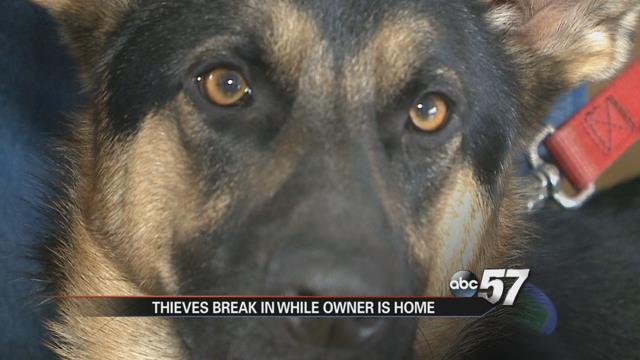 Randy Wishin has lived in his South Bend home for 25 years and had never experienced something like what happened Monday morning.

He recalled his wife left for work around 8 a.m.

“My wife had said goodbye to me, you know, like two minutes before that,” said Wishin.

He woke up to his German Shepherd dog named Thor barking and the alarm continuously going off.

“The dog was going crazy. The door alarm was going off and it don’t go off unless there’s somebody at the door,” he recalled.

He did not think anything of it at the time because he knew his wife had just left and thought she may have come back in for a moment.

However, Wishin got up and followed Thor to the front door.

Then he saw the thieves loading up his 40" TV in their car.

“I saw two people trying to throw the TV, I didn’t know it was the TV, they were throwing something in the back of their trunk.”

He recalled there were three guys, one who he thinks is named Andre because he heard one man yell to another "Andre don't leave me" as they were fleeing.

“They probably would have a gotten a lot more stuff if it wasn’t’ for the dog," he said.

St. Joseph County Police responded to the incident at about 8:30 Monday morning.

“The vehicle was described as being kind of like a Ford Taurus like a medium gray sort of color. The victim reported that that vehicle fled northbound on Mayflower from the residence and that there were at least three suspects involved,” said Assistant Chief Bill Thompson.

He said daytime robberies can be common because thieves will make the most out of the time they think homeowners are gone.

“A lot of people who do those day time break-ins, they’re timing it where they’re hitting places shortly after folks leave for work, it gives them the maximum amount of time before their crime is discovered,” Thompson added.

Wishin recalled that his neighbor told him later he saw a car in the driveway during the time it happened; however, he thought nothing of it because it was during the morning when he knew Wishin would be awake.

“He thought they were one of my friends because you know it was eight o’clock usually I’m up and moving so he didn’t think anything of it. When he saw him taking the TV and me running out of the house after him, then he knew something was up,” said Wishin of his neighbor.

Thompson said the best way to protect yourself from home robberies is to be proactive by installing security systems and surveillance cameras in your home. Also have conversations with neighbors about your holidays plans so they know to be on the lookout if a suspicious car shows up at your house.

“It’s a little more difficult this time of year with lots of vehicles that aren’t familiar to the neighborhood coming in and out, people having company but still at that, know what your neighbors are doing,” said Thompson.

Wishin and his wife have plans to install surveillance cameras in and around their house to protect them for an incident like this again.