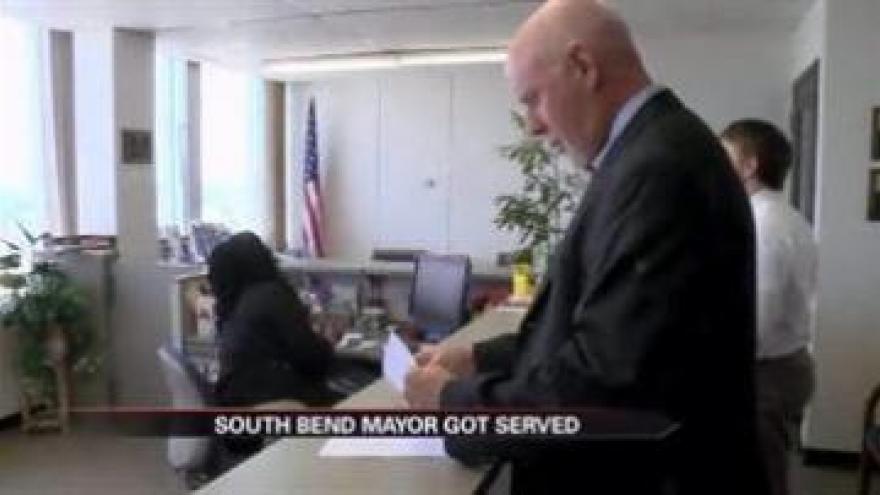 In his hands were two copies of a subpoena giving the Mayor seven days to provide copies of any and all tapes and/or digital recordings related to the Mayor’s news releases on May 29, and May 30; which referenced the resignation and demotion of former police chief Darryl Boykins.

The subpoena also requested the tapes and/or digital recordings cited by the Mayor in the termination of South Bend Police Department Communications Director Karen DePaepe.

This comes less than 24 hours after the South Bend Common Council voted 8-1 to instruct Walton to serve the subpoena.

One copy of the subpoena was delivered to interim City Attorney Aladean DeRose; the other was hand delivered to the Mayor’s Chief of Staff Mike Schmuhl, according to Walton.

Monday night when asked if he had plans to reject the subpoena immediately, Mayor Pete Buttigieg said he would have to meet with attorneys before doing so.

According to Walton that was an acceptable, and responsible way to approach the situation.

Walton also indicated, Buttigieg could take a reasonable amount of time with responding to the subpoena. “They have indicated previously that they would respond promptly to the subpoena and let us know their position,” said Walton.

He expects Buttigieg to refuse the subpoena soon so that court proceedings could be arraigned quickly.

“The mayor has a right to meet with his counsel, and make a decision about how they are going to respond. I would hope they already know,” said Walton.

It has been four and a half months since this scandal started, and Buttigieg has made his stance clear when it comes to the tapes.

On May 14, 2012 Buttigieg said, “Anytime that there is an indication that there could be anything unethical in any part of the city, I care.”

Two weeks later, on June 1, just a day after U.S. Attorney David Capp informed Boykins and DePaepe his investigation did not warrant charges, Buttigieg said, “I am concerned about what’s on these tapes. I want to know, and I want the community to know.”

Tuesday, Buttigieg was given that chance; by 5:22 p.m. he had not taken it.

An email sent by his Chief of Staff, Mike Schmuhl, at that time indicated Buttigieg had not yet rejected the subpoena.

It also indicated that a decision was not likely to come Tuesday evening or Wednesday, according to Schmuhl’s assessment.

Obviously that could change, and therefore Schmuhl added that he would keep us informed as to what the Mayor decided to do, and when the decision was made.

Schmuhl also pointed out that the City was given some time to make the decision.

Once the subpoena is rejected, as is expected, Walton will file a petition with the Circuit Court to rule on the subpoena and the access the Common Council has to the tapes.

The only thing holding that process up, is Mayor Buttigieg.