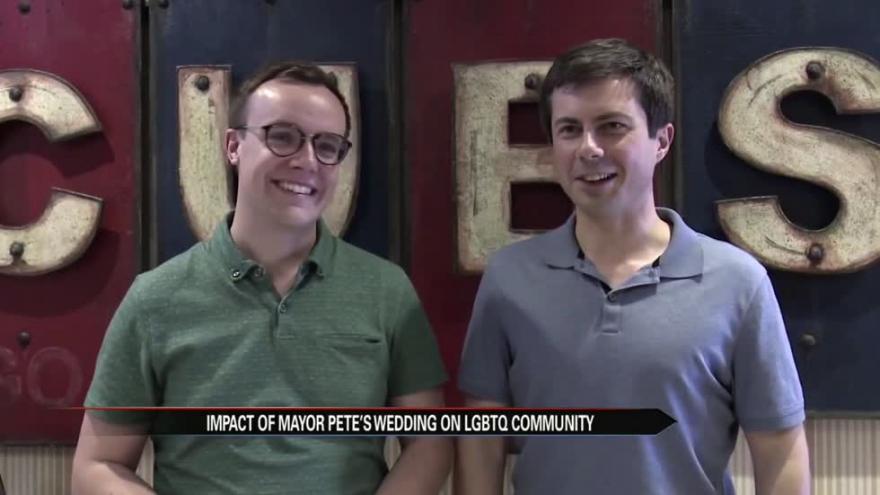 The pair will have their wedding ceremony at the Cathedral of St. James Episcopal Church on Lafayette Street in Downtown South Bend. The mayor made headlines in 2015 after coming out as the first gay mayor in a mid-sized city.

“Seeing that we have a gay mayor is something that a lot of the teens in our community have really vocalized that maybe they could also go into politics,” said Tricia McCann, who’s with The LGBTQ Center.

Randy Kelly hired Glezman to teach Humanities at The Montessori Academy in Mishawaka. Kelly said he hopes the couple has fun and enjoys each other at his time in their lives.

“You can really see them really feed off each other in terms of their work ethic and enthusiasm,” Kelly said.

He said Glezman has committed himself to the curriculum at the academy and even added his own spin to it. This year, Glezman took students on a Kindness Tour to Los Angeles, where they learned from city officials to be kind to themselves, others, and their cities.

Janynie Kelly said Glezman also invites his students to think for themselves, rather than be told what to do. She said she appreciates this form of teaching, but knows she can call on him if she needs help.

“Kids at our age, we have a lot of different things going on,” she said. “It’s just really nice to have a person to be able to go to.”

McCann said they have been living in South Bend all their life, and remembers when Mayor Buttigieg came out in an editorial in 2015. They said the community supports Mayor Pete, just as much as he and Glezman support the LGBTQ community.

“He’s just a great guy,” said Jay Campbell, who works at CJ’s Pub. “He’s been a great customer and we love having him.”

Campbell said Buttigieg has always helped him with a problem even if he couldn’t solve it. He said he is very happy for him and wishes him the best.