South Bend neighborhood without water for nearly a week 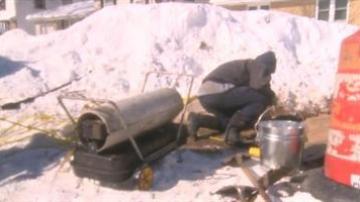 SOUTH BEND, Ind. -- The extremely cold weather is causing water problems for a lot of Michiana residents. In South Bend's Wedgewood Park neighborhood were without water for six days because pipes were frozen. They say they it was horrible to be without water for so long.

Many of the residents said they made it by visiting friends to take showers, wash dishes and do their laundry. They're worried the problem won't be resolved until spring.

Residents on Dresden Drive were without water for six days.

"I have a two-month-old baby so I'm constantly washing bottles, taking bottles out of the house all of the time, trying to keep his clothes clean and then I'm taking them out to get their baths and it's been a lot of in and out of the house," said resident Beverly Neto.

Neto has lived in Wedgewood Park for seven years and has never gone so long without water while living here.

"I went out and asked the professionals and they said these main lines are only buried three feet deep so the frost line is being pushed down it's been so cold," said Neto.

Gail Hickey has lived in Wedgewood Park for almost 20 years and says she has never experienced a water problem like this one.

She thinks the infrastructure is just outdated.

"The lines are buried at different depths so a lot of the problem arises from the fact that this neighborhood is very old and the pipes are all very different," said Hickey.

Crews heated the pipes for more than 36 hours before they started to thaw out.

Water was restored to most homes Thursday.

Neto is worried this isn't the end of her nightmare.