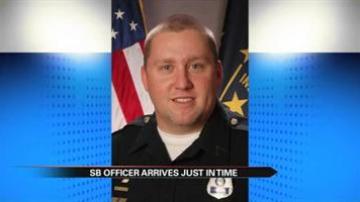 SOUTH BEND, Ind.-- A patrolman rushed into a smoking home to save an elderly man from a fire on Saturday.

Police said the fire started around 10 a.m. in the kitchen at 150 North Birdsell Street. 90-year-old Clarence Clark was trying to cook breakfast when the stove top caught fire.

Officer Aaron Brick was making his usual rounds when he saw smoke coming from the front door and rushed into the home.

Brick is being hailed a hero.

Leticia Fly said, “He never thought once about his own life, he was just worried about who was in that house and he was going in to save that person. That was an excellent thing.”

Brick has served for 14 years with the South Bend Police Department.

Fly said, “A lot of people say well that’s the police officer’s job, but some of the officers around here go beyond that. Everyone is human, and for him to rescue the older gentleman I think that is a good thing.”

Clark's family was too upset to go on camera about the incident. But according to neighbors, Officer Brick arrived just in time.

Officer Brick and Clarence Clark were both treated at Memorial Hospital for smoke inhalation and were later sent home.