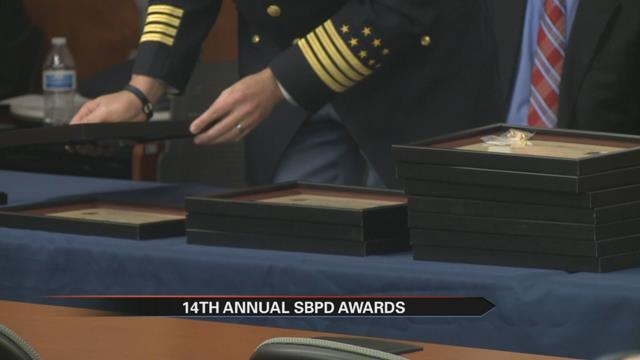 “All the guys I worked with in [the] major crimes [department] put in the same effort I did,” South Bend Police Officer of the Year Joe Mitchell said. “They are all just as deserving as me; I don’t know why they picked me.”

“Everybody I work with works very, very hard,” officer John Comeau, who was also named South Bend Police Officer of the Year, said. “And it’s almost embarrassing to be recognized like this cause I know that the guys I work with, they deserve every bit as much as I do.”

Despite their big awards, Mitchell and Comeau did not want any recognition for their hard work.

“These are some of the extraordinary actions that officers have taken over the course of their last year, 2015,” South Bend Police Chief Scott Ruszkowski said.

Members of the force and the community they serve are honored at the yearly event, which highlights everything from who has saved a life to who’s earned special recognition for something they contributed to the department or the community.

But many of the officers honored made clear they did not feel they deserved an award and they often credited their colleagues and families with helping them succeed.

“When you’re recognized individually in what’s a team effort, it can be very, honestly, a little embarrassing; definitely very humbling,” Comeau said.

But Ruszkowski said the ceremony is a small way of commending his officers for their tireless work and letting their families hear about their achievements.

“When some of the officers names were mentioned, [their families] were kind of in shock, as to, ‘I didn’t know that he or she had done this?’” Ruszkowski said.

Ruszkowski said the event is not only held to honor the officers, but also to thank the families of his department.

“They are a huge part of this that keeps the officers plugging along every day,” Ruszkowski said.

And though every day on the force is not filled with awards and refreshments, Ruszkowski said it’s a desire to serve the community that keeps his officers striving to be their best.

“If they don’t, who will?” Ruszkowski said. “And I think that’s what the motivation is.”

Officer Mitchell earned his award after investigating more than 100 criminal incidents in 2015, most of which were felonies.

Officer Comeau has made such an impact in the community, Ruszkowski said the department gets at least one phone call each week from someone commending Comeau for his service.