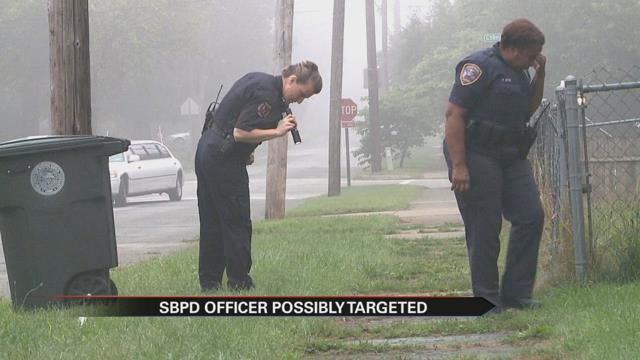 Shots were fired on South Bend’s West Side this weekend and police think one of their own might have been the target.

Shots were fired near an officer while he was investigating a report of vandalism in the 1800 block of Brookfield Street.

Two residents were with that officer early Sunday morning.

Dennis Campbell says he and his wife had to dodge a flurry of bullets while talking to officer Tyler Donlon.

It was the second incident to hit their home early Sunday morning.

Campbell says that was the order he was given by the officer a few feet away but also in the line of danger.

“[My wife] ran toward the door and I laid flat on the ground,” he said.

Police were sweeping the area after multiple shots were fired near South Bend officer Tyler Donlon on the corner of Brookfield and Hamilton around 5:30 Sunday morning.

“You don’t know where the shots were coming from and you don’t want to get up to be a moving target,” said Campbell.

It's an attack the police department thinks could’ve been targeted.

“Stuff that keeps you awake at night," said Chief Ron Teachman of the South Bend Police Department. "Worrying about the safety and well being of my officers.”

That was the second incident to hit Campbell’s property that day.

“This is the first drama we’ve seen in 10 years of living here,” said Campbell.

The first incident, which brought Officer Donlon to his location, was a report of vandalism to his two cars.

It happened just a few hours before the shooting.

Although no one was injured, Campbell would like to keep crime away from his home.