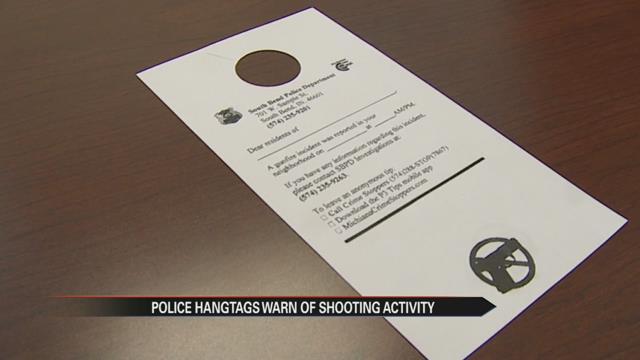 For South Bend residents, information on nearby crimes could be just on the other side of your front door.

South Bend Police are using a new approach to keep the community informed. Whenever there’s a gunfire incident in the city residents in that neighborhood will find a door hanger describing what happened.

The door hangers provide the basic info about what happened in English and Spanish.

South Bend Police say this is just another step in strengthening their relationship with the community.

Capt. Robert Hammer of the South Bend Police Department says he hopes it will not only keep the community informed—but make them feel more comfortable relaying information to police.

“I think it’s always good to have a good strong connection with the community and this is just another vehicle to make that connection,” says Capt. Hammer.

“I am one of those people, I call all the time. If I heard a noise, If I heard something that might be gunshots. This is a nice heads up for the residents to know to keep an eye on what’s going on in your neighborhood,” says Carney.

Its calls like Carney’s that prompted Capt. Hammer and his department to make it easier for residents to know about gunfire incidents.

“We go out knock on doors when an incident occurs we’ve done that in the past, if no one was home this door hanger gives an opportunity to let them know we were in their neighborhood and that something had occurred out there,” says Capt. Hammer.

The notices also give residents the resources to share what they know and the opportunity to do it on their time.

“They don’t either answer their door or they don’t want others to see that they’re communicating to police, this gives them that opportunity to contact us and remain anonymous if they choose to. The solvability for a law enforcement agency such as us goes up dramatically when you have community involvement,” says Capt. Hammer.

Carney says she thinks residents will be more likely to help police with investigations when they feel heard.

“If they’re giving us information back we might be more likely to share information, and not feel like we are telling them but we’re not being heard,” says Carney.