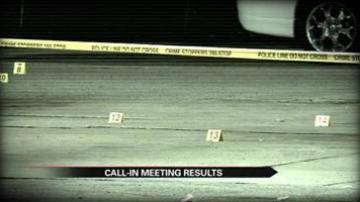 SOUTH BEND, Ind. -- The second call-in between South Bend Police and 30 men on parole wrapped up at 10:00 Thursday night. It's all a part of South Bend's Group Violence Intervention to clean up the streets and reduce crime.

From May to August of this year, crime has been down 38-percent compared to years past.

While numbers are important, they don't tell the story as well as someone who has been through the program and knows how important it truly is.

"If you want to anything, you can just put your mind to it," said Shane Cantu.

Cantu attended the first call-in back in May.

Cantu has lived in South Bend his whole life, but he's seen a different side of the city than most, making a few mistakes in the past.

Now, he's moving forward and working at a local auto body shop. He says he likes it and plans on making a career out of it.

Working at the auto body shop is something Cantu never thought he would do before South Bend's first call-in meeting back in May.

He is just one example of the success that South Bend's Group Violence Intervention has had since the group first met earlier this year.

The concept is simple. Gather a group of people together who had some trouble in their past and give them a chance at a new way of life through job readiness and therapeutic training.

Isaac Hunt is the Community Resource Advocate for Goodwill Industries of Michiana and one of the organizers of the call-in.

He's been through the same struggle as Cantu and now he's paying forward the help he received 15 years ago.

"Now I'm really passing forward what's been given to me," says Hunt.

Hunt says these conversations at the call-in are important because the young men are getting advice from lawyers, and other federal government agencies.

As much as police and other community leaders want to help these former criminals, they also require something in return.

Since the last call-in, the numbers prove progress is being made.

"We've had a 38-percent decrease in shooting victims in our city compared to 2013," says Zultanski.

While graphs and charts tell some of the story, organizers need people like Cantu to live a successful life every day and spread the message that it is okay to do the right thing.

The date of the next call-in has not been determined yet. But, Lieutenant Zultanski says as long as the violence keeps going down, these types of conversations will continue to happen.