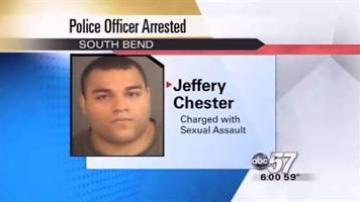 Right now, A local minister is shocked and outraged after his daughter became a victim of a horrible crime. The woman says a police officer, who took an oath to protect and serve, violated and sexually assaulted her.

ABC 57 News spoke to the first woman who came forward, as well as her family, and tonight they say they will do anything to make sure justice is served.

Chester was only charged with a misdemeanor, but the woman, who does not want to be identified, said she was sexually assault and he should be facing felony charges.

That is why her family says they are now taking legal action.

It was just before midnight, in September, when one traffic stop would soon change one woman's life forever.

She says she was driving down Northside Boulevard, near Howard Park in South Bend, when she saw flashing lights in her rear view mirror.

She says South Bend police officer, 26-year-old Jeffrey Chester, pulled her over because her license plate light was not bright enough for him to see her plate.

After she was pulled over, she says Chester then asked her to drive to a near by parking lot.

She says she was then asked to get out of the car and she says that is when the officer groped her.

According to documents obtained by ABC 57 News, Chester is accused of fondled her "breast, skin to skin, with his hand".

Accusations the police department says it took very seriously from the start.

After the woman filed an official complaint with the department, another woman came forward saying she too was touched inappropriately by Chester.

The 19-month rookie was immediately taking off the street and stripped of his police powers.

On Monday night, the family of the woman said that is not good enough and they have hired a lawyer to see to it Chester's punishment fits the crime.

They said they want him to be charged with sexual battery, a Class C felony or a Class D felony (depending on the facts alleged), not the misdemeanor battery charge brought against him on Monday.

The family says Chester did not only violate their daughter, he violated all of South Bend when he used his authority to commit the crime.

The victim says she has lost trust in law enforcement and is scared to pull over for another officer. That is why she says she came forward, as painful as for her to do.

Police arrested Chester this morning. He was booked into the St. Joseph County Jail.  His bond is set at $10,000 Corporate surety or $1,000 cash.

Chester is now currently out on bail and has been relieved of duty, with pay, pending the review of his employment status by the Board of Public Safety.