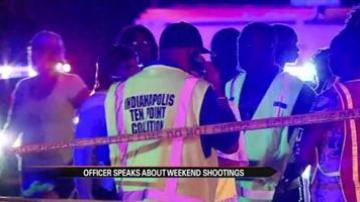 SOUTH BEND, Ind. -- It was a violent 4th of July weekend in Indiana and two Indiana police officers were killed in the line of duty.

“It’s like getting that kick in the butt when a family member dies, or a brother or sister dies, or you lose your best friend,” said South Bend Police Sergeant Charles Stokes.

Stokes said law enforcement officers are all members of a close family.

“Cops all over the country, I don’t care where it’s at it’s a brotherhood. I feel like we’re all family and we’re all a part of the same fraternity,” Stokes said.

Early Sunday morning, Westerfield was found shot to death in his squad car. It was his 47th birthday.

“We are sworn to do a job. And these officers do that job and we don’t take it lightly. And they go out there and do it to the best of their abilities and if they fall doing their job, they know that’s part of it,” Stokes said.

Three men were questioned in Westerfield's death but no arrests have been made.

The suspect in Renn's death was injured in the shootout. He hasn't been charged yet.

South Bend Police plan on honoring those fallen officers, but have not finalized those plans.