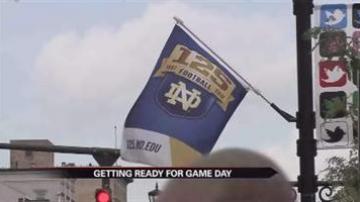 SOUTH BEND, Ind. -- The countdown is on. The big home opener is just days away and the city of South Bend is getting ready.

The Irish take on the Purdue Boilermakers on Saturday afternoon and kick-off the most profitable time of year in South Bend.

There are several factors at work for this weekend. Because this is the first home game of the season and it’s the 125th anniversary of Notre Dame football, the energy is high.

But, because the game is against Purdue, local profits aren’t expected to skyrocket like they might for some other matchups this season.

Fans are ready and so are the local bars.

With just four days away from that special time of year, the city of South Bend and Notre Dame come together to celebrate football.

“I mean this is what it’s all about if you live in South Bend,” said Rob DeCleene, the executive director of the South Bend/Mishawaka Visitors Bureau. “This is pretty much the best time of the year. So, lots of anticipation, lots of excitement, it’s kind of what we do best if you ask some people so it’s a great week.”

It’s a week and weekend that’s been in the works for months. Hotels started taking reservations a year ago, construction is expected to open up, and bars have been prepping since July.

“[We] got all the permits that we’ll need for the entire football season,” said Delinski. “We met with our staff last week just to go over the rules and regulations and policies of the bar.”

But on Tuesday, it was all about the smaller details, like getting ready for the 3,000 to 4,000 people who will make their way to The ‘Backer .

“We will go through anywhere from 60 to 80 kegs for a normal game,” explained Delinski.

Although the Notre Dame vs.  Purdue matchup isn’t a rivalry like USC or Michigan, the city of South Bend is still raking in the profits.

“A few years ago Forbes put out a study that put that estimate at $10 million, $10 million a weekend,” explained DeCleene.

According to the Visitors Bureau there are still a few hotel rooms available in the area-- a rarity for home football games. But, officials attribute the vacancies to Purdue’s close proximity to the Notre Dame campus. So, some Purdue fans will be coming in just for game day and then heading on out.