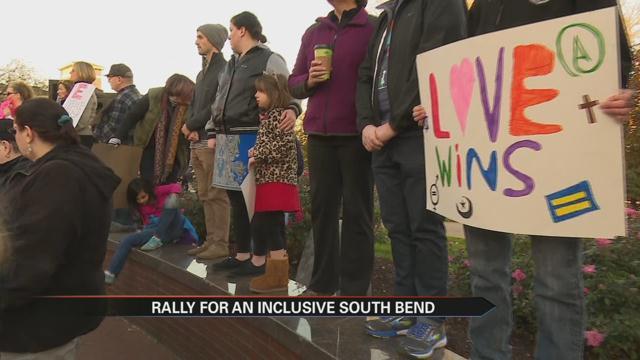 Protests about the election results have swept the nation since Tuesday. Now, they’ve reached Michiana.

With some anti-trump protests turning violent, South Bend is peacefully joining the fight.

“I think for a lot of us where the election didn’t turn out the way we wanted, we’ve been in a little bit of a gloom, and this was a way to participate in something very positive in the community,” said South Bend resident Cecilia Lucero.

“This is a time where we need to stand up in solidarity and unity and create community and focus on that and move beyond our differences and find ways to work together,” said Saint Mary’s College professor Terri Russ.

Mohammad Siraj-Uddin of the Islamic Society of Michiana and Karen Nemes of Pro-Choice South Bend also came out to show their support.

“The issue for particularly people like me goes far beyond the president. This goes to the courts. The decisions that they’re going to be making on my population in the next few years,” said Carlson.

“It helps that you know to send a message that we are not alone. There are many other people who feel the same way,” said Siraj-Uddin.

“So my sign says love trumps hate, and I really believe that to be the case, and I think that as corny as that sounds, love is really the only thing that we really have that multiplies the more that you give it away and that can really lift people up and bring people together,” said Karen Nemes of Pro-Choice South Bend.

That was the message plastered across hundreds of people’s signs Saturday. Some of the signs said, “Choose Love” and “Peace Trumps Hate.”

But many are hoping this rally is an impetus for action.

“I hope in the long run that it means that there will be people who will be willing to organize in the future besides just have rallies. Rallies are great. They unify folks. They kind of allow people an emotional release, but there has to be follow-up. There has to be action and organization that goes beyond that and strategy,” said Carlson.