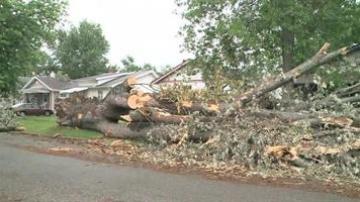 SOUTH BEND, Ind. -- A South Bend resident needs help because her home has been blocked by a fallen tree for a week. She says she has felt trapped all week and worries if there were an emergency crews wouldn't be able to get to her.

One week ago, Jackie Hagedorn walked outside her home only to find a large tree had fallen in front of her River Park home.

"I opened my door and I was like, wow, the tree came down," said Hagedorn.

A tree she can describe with one word.

It used to be the biggest tree on 32nd Street.

"They came in the afternoon with a front loader and had to cut some of it and then just pushed it over," said Hagedorn.

Now what's left of that massive tree is blocking the only exit from her home.

She says she worries whether or not first responders could get around the debris if there were an emergency.

"If my house catches on fire, it's going to burn down. They can't get to it. And if I needed medical care, they can't get to me you have to go clear down there or over there," said Hagedorn.

With hundreds of trees down throughout the city from last week's storms-city crews say they are hard at work to clean up.

"I understand the city is a mess, but come on. Something like this should be a priority," said Hagedorn.

We called South Bend's 3-1-1 help line. They said they would put the tree on the list to get cleaned up as soon as possible.