South Bend resident waits over 8 months for new trash can 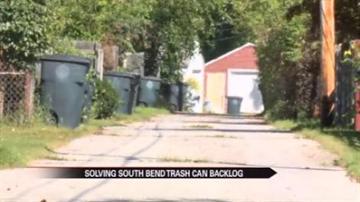 SOUTH BEND, Ind. -- Trash pickup in South Bend is simple, unless your trash can is stolen. One woman says she has been trying to get a replacement trash can for 8 months.

Every trash pick up day, Lorraine Shafer is frustrated.

She used to put her trash in her official South Bend trash can, but someone stole it.

"It was night and I heard the car stop, but I had no idea that someone would take my trash can. And it was a small one, I really liked the small one," said Shafer.

It has been 8 months since her trash can was stolen and she says the city still hasn't brought her a new one.

She says the 3-1-1 call takers are friendly, but they haven't succeeded in getting her a new trash can.

"Good service. I had a boy this time, a young man and he sounded like it was going to be coming," said Shafer.

We went to the water works building and talked with the 3-1-1 director, Cynthia Simmons.

She said she didn't have a record of Shafer's request and would get her a new trash can by the end of the day.

We asked the Department of Public Works why it took so long.

"The issue is we need to perform and so if someone calls, that's all they should need to do. We need to get people comfortable with calling 3-1-1 and getting results," said Eric Horvath, Director of Public Works.

He said before this summer, if your can was lost or stolen, your name was added to a list. And that list got very long.

The department just purchased thousands of new cans and they're playing catch-up.

Some residents said they bought a replacement can at a local store but that trash wasn't picked up.

We found out that South Bend's cans are designed to fit inside the claw of the garbage truck.

If you've been paying for trash pick-up and having to drop yours off at a dumpster, contact the Board of Public Works.

They may be able to work out a refund for you.